Who's Controlling the TVA in Marvel's "Loki"? 4 Possibilities and Who We Think Makes the Most Sense. 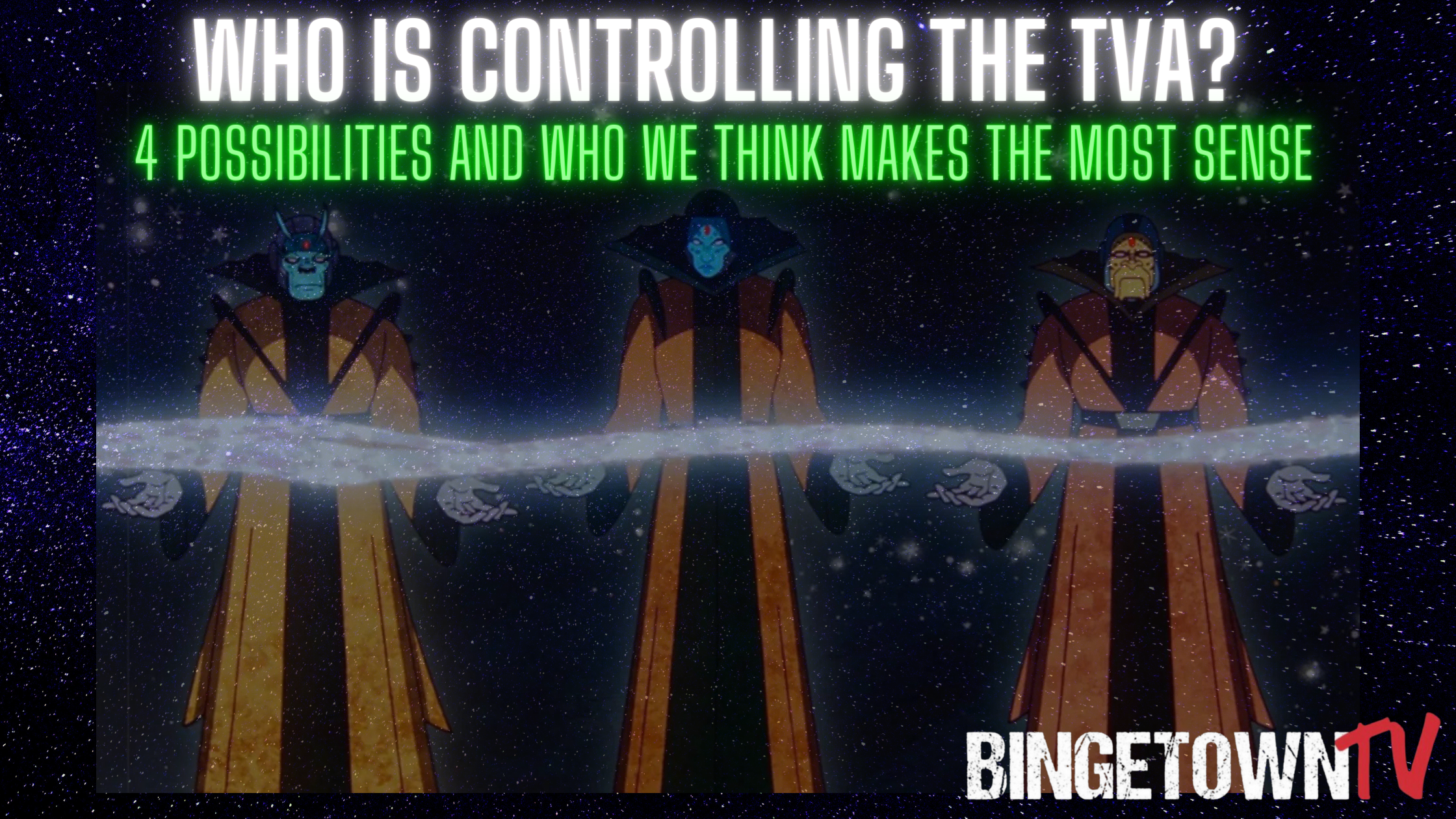 This week’s latest Loki Episode, “Nexus Event”,  just confirmed something that our podcast and many other people were theorizing since the very beginning of the season… The “All Powerful” Time Keepers are not actually in charge of the TVA. If you have been keeping up with our podcast, we’ve been saying all along that there is a “Wizard of Oz” type feel to the Time Keepers we kept hearing about every single episode. We don’t know about you guys, but from the moment the elevator doors opened and we saw the Time Keepers, they just looked “fake” to us.

At the conclusion of this wild episode, Loki (Tom Hiddleston) and Sylvie (Sophia Di Martino) are brought before the Time Keepers to be “pruned”.  After a change of heart, Hunter B-15 (Wunmi Mosaku) comes to the rescue and a big fight breaks out. Sylvie lands a huge blow on one of the Time Keepers and reveals… that the Time Keepers are androids. As the wise Sam Wilson once said, “The Big 3 - Aliens, androids, and wizards.”

Wait. Didn’t we just say that it seems like she is not the one pulling the strings? We definitely did, and we are sticking to that assumption, but the possibility of her being the “big bad” of the series still deserves to be discussed. Ravonna being the series'
"big bad" seems like the easiest conclusion to come to (Agatha All Along anyone?), but at the same time seems off. Let's start off with why it makes sense. Renslayer controls and signs off on all TVA missions. She has always claimed to have “access” to the Time Keepers and is definitely aware that they aren’t real. We know from this recent episode that she is willing to do anything to get rid of anyone who threatens the TVA’s secret (even her “friend” Mobius). She actively thwarted Loki and Sylvie from getting any answers and even pruned Loki at the end of the episode.

So why don’t we think it is her? Flashbacks show that at one time she was a hunter. This means that at some point someone else was running the show. We even saw that there was another judge (her current position) back when she was a hunter. This seems to indicate that she started low on the totem pole and progressed through the ranks. Also, she seemed terrified and it seemed obvious that she was doing someone else’s bidding when she was attacking Loki and Sylvie at the end of the episode. She seems like the perfect “Number 2” to our “big bad” of the series, but just doesn’t seem to fit as the “big bad” herself.

Speaking of Revonna, one of our own hosts, Brian, brought up on the podcast that she has a comic book connection to Kang The Conqueror. In the comics, Kang is in love with Ravonna Renslayer and it seems that her only important comic storyline has to do with him. Why give this character the name from the comics if you aren’t going to connect her to Kang at some point?

Ravonna aside, Kang has been a common theory amongst fans for other reasons. Many fans have noticed since early on in the series that one of the Time Keeper statues looked verrrrrry similar to Kang. Plus, his arrival in the MCU was already announced, just not for Loki. Played by Jonathan Majors, he's set to debut in the next Ant-Man movie (Ant-Man and the Wasp: Quantumania). Jonathan has stated that he will not be showing up in Loki, but that wouldn’t be the first time MCU Actors/Actresses have lied to keep important secrets from the fans.

Why don’t we think it is Kang the Conqueror? Two big reasons. Number 1, he is a conqueror (duh!), and as a conqueror, he would not want to be hiding behind the ruse of the Time Keepers. Kang wants everyone to know who their leader is and if he was the “big bad” we would know it by now. And number 2, we don’t think Marvel is ready to pull that trigger yet. We definitely believe Kang will be a huge part of the MCU going forward, but his rise may be a little bit more of a slow burn than just announcing him as the real leader of the TVA.

Are we joking? Maybe a little, but there is some credence to this theory. Our first piece of evidence that there is a lot more to the Miss Minutes character comes from the actress who voices the character, Tara Strong. In an interview with The Hollywood Reporter, when asked about Miss Minutes, Tara said, "The beautiful thing about this character is you don’t really know who she is, where she’s from, what her origin story is, how sentient she is, if she has a horse in this race at all, and what her intentions are, if any. Like any good, exciting adventure, TV or film, you are left wondering that all the time. So she’s an intriguing character, and that will continue." She indicated that there is more to learn about Miss Minutes and we will see more of her in this series. That quote came after episode 2 aired. Ever since episode 2, we haven’t seen much of Miss Minutes. And if that quote is to be believed, that means that we will be seeing more of her in either Episode 5 or 6 (or both).

This Miss Minutes character is very intriguing because like Tara said, we don’t know much about her. We can’t really tell how “real” she is. She seems sentient and she can bounce around from real life projections to being projected through technology. Technologically she seems kind of similar to our beloved Vision. Is she just a training manual / piece of propaganda for the TVA? Or is she the one controlling everything from behind the curtain? Only time will tell.

After this most recent episode and the mid-credit scene, this seems like the safest answer. We know that our Loki believes that the TVA is the greatest power that the universe has ever seen. We also know that while there can be major differences from Loki Variant to Loki Variant, it seems safe to say that any Loki that figures out the power of the TVA would want to control it. And before the comments about Sylvie not wanting to take over the TVA roll in, we believe that her purpose is fueled based on her specific circumstances. She does not want to take the TVA’s power, but destroy it, because she has been personally targeted by them and has been running from and fighting them her entire life.

The Mid-Credit scene shows that we have at least 4 other Loki’s that were targeted and pruned. We know that our Loki and Sylvie have been targeted this entire series. Why else would there be such an interest in getting rid of all Loki’s from the Sacred Timeline unless the leader is a Loki who wants to be the last Loki standing?

Our guess is that there once was a powerful leader of the TVA who actually created the power that keeps the entire system running, but this power was thwarted in the “past” by a Loki Variant. In our latest podcast episode, Brian brought up the question; if a Loki took over the TVA, then why isn’t the TVA being used for a more Loki-centric plan instead of pretty much just operating under business as usual? Jim’s response was that Loki already admitted this series that he craves power and attention and he wants to reflect the illusion that he is powerful. Loki wants to win. If you take over the entity that you believe is the greatest power in all of the universe, isn’t that winning? Loki can sit on the throne and finally have his win.

So what do you guys think? Which one of these options make the most sense to you? Or did we miss something? Let us know in the comments! There’s only two more episodes of Loki left and we can’t wait to get our answers! Based on the end of Episode 4, Sylvie is NOT messing around and Renslayer will be revealing some bomb-shells to her and us very soon. 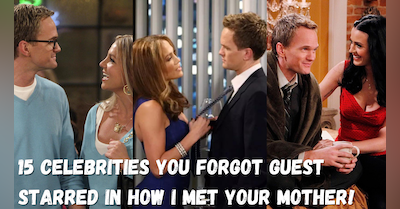 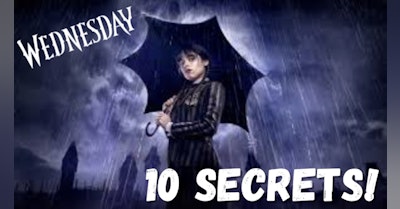